The Sonic Frontiers Phono 1 Special Edition has some remarkable qualities that are shared by some of the best available phono preamplifiers. But before we look further into its sonic qualities, a little history. 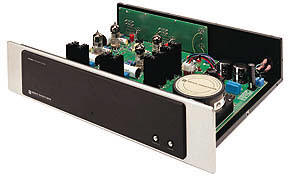 Sonic Frontiers was a manufacturer of high quality components until a few years ago. Their reputation was built on using audiophile quality parts and sturdy construction at almost-budget prices. The components were good looking, but by no means attempted the extravagant, modern art appearances of, for example, Jeff Rowland’s components. SF1 components were engineered to be very reliable and offer exceptional value. Unfortunately, the company fell on hard times. The exact reasons for its demise are the subject of rumor and debate. Many of their components are now considered to be classics and are preferred over components in current production. Indeed, the market for used SF products is as robust, and the prices are as dear (as a percentage of original list price), as many of the better models in current production today.

All SF products continue to be supported by Parts Connexion which is owned and operated by Chris Johnson, the former chief dude at Sonic Frontiers. His team can repair all and upgrade most SF gear. He has developed an SE+ upgrade for the Phono 1 or Phono 1SE that he says is an improvement over the stock SE. If you are inclined to upgrade components, you might find a stock Phono 1 and then send it to Parts Connexion for the SE+ upgrade. The upgrade will cost about $760, which includes a set of new tubes.

There were several SF phono stages. The SFP-1 and SFP-1 Signature were superseded in about 1997 by the Phono 1. The Phono 1SE was introduced in 1999.2 The Phono 1SE offered further parts upgrades from the standard Phono 1, and was the last phono stage produced by Sonic Frontiers. It is said that with the development of the Line 3 line stage preamplifier, the sonic shortcomings of the standard Phono 1 were recognized to be the limiting factor in the Line 3’s ability to make superior music. Hence, the Phono 1SE. According to Chris Johnson, the Phono 1SE is “one of our most elegantly (and thoroughly) designed SFI pieces.” It was the “best measuring tube unit STEREOPHILE ever came across”.

The 1SE uses a pair of FET input amplifiers for the first gain stage, followed by four 6DJ8/6922 tubes. Input impedance is adjustable via DIP switches accessible from the rear panel. Anyone who experiments with impedance settings or places their phono stage in a shelf unit which requires you to pull the wires, remove the preamp, open the cover, change the input impedance setting, and then do all of that in reverse, will appreciate the attention to user convenience of having easily accessible switches. Some manufacturers make these required setting changes very inconvenient. I don’t understand why. The 1SE comes with a nice tool kit including a pair of cotton gloves for tube handling, a screwdriver, and a set of selected and matched Siemens tubes. The gain is 62 dB (1200x), which is probably sufficient for any low output MC cartridge or associated system. A gain of 54 dB was also available on special order, and if you acquire one of these, the gain can be changed to 62 dB by a competent technician. There is an internal switch to quickly and easily change the front panel Mute switch to provide either low-volume or full mute. Very nice.

I used a PS Audio xStream Plus power cord for most of the review, although I tried a couple of others. In my neighborhood, power products normally have a noticeable, but small, effect on the sound. This also depends on the time of day: as the clock approaches midnight, the power gets better and the whole system sounds cleaner and more vivid. Or maybe it’s just me. Preamps included a Rowland Synergy IIi, BAT VK-30, Audio Research LS-25 mk. 2, and Cary 300SEI, SLI-80, and BAT VK-300xSE integrated amplifiers. Comparison phono preamplifiers included a Rowland Cadence, Cary PH-302, Aesthetix Rhea, Tom Evans Groove, BAT VK-P20 (internal phono board) and VK-P5, and Conrad Johnson Premier 15 Series II.

Tube rolling was fun, and with just four tubes, it is relatively inexpensive. I tried the Siemens, JJs, Mullards, and Amperex Bugle Boys. I did not try the expensive CCa’s, but I encourage those with deep pockets to check them out. The stock Siemens tubes were a bit hard and analytical in my system, although they were very dynamic and had terrific extension in the bass and treble. But with the Bugle Boys…

…I found love. Here was the ideal combination of dynamics, resonant and powerful bass, midrange sweetness, highly detailed but never harsh upper midrange, and clean, airy treble. The bass was great; hold on there, it was the midrange that had the special magic that pulls you into a recording; wait a second, it was the clean treble that said this is a superior product. Actually, the entire presentation was uniformly excellent. The bass had exceptional power, going very deep with excellent resonant definition and control. The midrange was very smooth and even, presenting both male and female vocals with realistic precision and presence. And that treble: very extended, fast and detailed with no hint of harshness or grain. Depending on the recording or interconnects, one might suspect that the FET input amplifiers are contributing just a hint of typical solid-state leanness in the midrange and lower treble. This is a small effect, but please note – it is not consistent with all recordings or associated components.

Sidebar. This is the rating scale I use for the magnitude of sonic characteristics (thanks to Dr. C.Z. of Denver):

This phono stage can pull every nuance out of the tiny signal from your cartridge and present it in vivid detail. I often use the cut Foggy Mountain Breakdown, from After Midnight by The McNeely-Levin-Skinner Band (Sheffield TLP-30) as an audio system torture test and to drive my cat from the room. It is an excellent test of speed, dynamics, detail, soundstaging, and resolution. This is a challenging piece for any phono stage (or cartridge). There are three events that define a musical note: 1 – the event that produced it, such as a pick on a string or a drum stick touching the drum head; 2 – the instantaneous start of the note, which is the beginning of the fundamental tone; and 3 – the near-instantaneous development and subsequent decay of the note itself. With lesser phono stages, one usually consistently hears only 2 and 3. The Phono 1SE picked up every detail of the lightning fast finger plucking on this cut, and was also excellent at placing the musicians in clearly individual and specific 3-dimensional space.

The SF will let you hear the differences between phono cartridges and will enable you to quickly determine their optimum load impedance setting. Regarding the latter, you won’t have to guess which setting is the correct one. I tried a Shelter 901 and 90x, Dynavector XV-1s, Koetsu Black, Urushi and Rosewood Signature Platinum, Benz Ruby 2, and a Clearaudio Insider. The SF is an excellent analytical tool that laid bare the strengths and weaknesses of each of these fine cartridges in short order. There was a tendency, which was cable and system dependent3, to favor warmer and lusher cartridges (Shelter, Koetsu) instead of the relatively cooler ones (Dynavector, Clearaudio). For example, the combination of the superior treble extension of the Phono 1SE together with the amazing resolution of the Clearaudio Insider could be a bit too much on many recordings, usually the normal commercial pressings instead of expensive, heavy virgin vinyl, all tubed electronics, audiophile black gold disks. Is this a weakness of the Sonic Frontiers? I suggest it is not, but just a good example of the need to properly match the components in any good audio system. My favorite combination was the 1SE and Shelter 90x, speaking through the wonderful Graham IC-70 phono cable.

The Phono 1SE was remarkably quiet, very close to the slight background hiss of the Tom Evans Groove or Rowland Cadence; both solid-state units. The signal-to-noise spec is -83 dB; remarkable for a unit with tubes, and better than many solid-state phono stages. The signal-to-noise ratio is probably the most important spec for a phono preamplifier, a device that amplifies the cartridge’s tiny signal twelve hundred times. A wee little spot would look like a Tyrannosaurus rex footprint if amplified 1200x. Noisey phono stages are due for extinction, and they will not be missed.

Soundstaging was uniformly excellent. Left to right imaging was just about perfect, and depth was also very good. If the furthest corners of the stage were just slightly shortened, it was only noticeable on symphonic music, and then only in direct comparison to something like the CJ Premier 15 Series 2 with the Jensen transformers. But at half the retail price, the Phono 1SE was quite close in this regard. The only real shortcoming to the 1SE was that small touch of coolness, which was eventually identifiable as a small lack of ultimate harmonic richness, mostly in the midrange. Treble definition and fade out were very good, however. In every area, I preferred the Phono 1SE over the Cary PH-302 and Rowland Cadence. It made the BAT VK-P5 sound unmusical. Overall, it came closest to the Tom Evans Groove. While the Groove surpassed the 1SE in its special ability to put musicians in your room4, I found the 1SE to be more enjoyable over the long haul due to the SF’s richer harmonic and more dynamic, extended presentation.

The 1SE is extremely quiet, reliable, and easy to use. It also looks good on an equipment rack. Industrial chic. In the right system, which would not limit you very much in the components you might include, the Phono 1SE could easily be that end of the road component that gets you off the upgrade path. This is a very desirable phono preamplifier – if you can find one.

Footnotes:
1 Not to be confused with “Science Fiction”. You know who you are.
2 I’ll be happy to update this history with factual information. Please use the link on the home page to send an email.
3 With a simple change of interconnects and speaker cables, one can change a warm, smooth presentation into something aggressive and hard.
4 For SF fans (the other kind), the Groove is the “Transporter”. Listen to one and you’ll hear what I mean.