This is a controversial cartridge. The controversy has nothing to do with its sound, which we’ll get to in a minute, but with its heritage. There is a lot of discussion on Audio Asylum about the Shelter 501 and the Crown Jewel Special Edition cartridges being one and the same product. The Crown Jewel, reviewed in Stereophile (v.20 no. 4) where it was given a “Class A” rating, had a $2650 price tag. The Shelter 501 is available in the U.S. for about $800. Interesting, yes?

Where the Shelter 901 (also reviewed here in Jerry’s Audio Pages) has threaded mounting holes, the 501 mk. 2 does not. However, Shelter did something really smart with the 501:  the mounting is like a spade connector, open on the sides! After using unthreaded Koetsu Rosewood Signature and Urushi cartridges for years, I can attest that the Shelter “open slot” design is much easier to work with. Mounting is almost as easy as a threaded design. Insert one bolt and attach the nut a few turns. Then just slip the cartridge into place and tighten the nut a bit. Then set the 2nd bolt and nut in place. This is much less difficult (and less stressful!) than holding the cartridge in place and trying to get a tiny nut started. The mounting hardware is supplied, and includes different lengths of non-magnetic stainless steel Philips head bolts.

The 501 comes in a small, hinged jewelry-type box. Inside the box, the folks at Shelter share with you their sense of humor. There is a little surprise waiting for you in the box under the cartridge. Nice touch, Shelter! 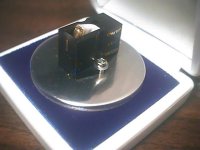 I refer you to the Stereophile review on the Crown Jewel, wherein Michael Fremer does an outstanding job describing the sound of the Crown Jewel/501. In that review, the Crown Jewel was described as “seductive and lush-sounding”, with an “overall sound…on the warm, relaxed side of neutral, but subtly so”. There are some cartridges that are great at bass reproduction, or others that are good at soundstaging, or at dynamics. The 501 doesn’t seem to have a particular strength, though, and this is a good thing. The 501’s personality is “of a piece”, a very well-balanced presentation that presents the listener with a carefully developed picture of the music that leads to relaxed musical enjoyment.

A question that was asked many times after the Shelter 901 review was posted was, “How does the Shelter 901 compare to the 501?” The 901 is better in certain areas than the 501, as one would expect given the higher price. The bass is a bit tighter on the 901, and the 901 has more crystalline highs. Imaging is close between the two. I listened to the 901 and the 501 on my Well Tempered Reference table, and also on a friend’s VPI 19-IV/SME 309. There were good results on the WT, but we agreed that the SME was a better match for both Shelters. Both cartridges also preferred loading at 100 ohms, although trying higher values is not out of the question since there was not the annoying “ringing” distortion that afflicts many other moving coil designs. Its lowish 0.4 mv output puts it on the edge of compatibility with many tube preamps, but it worked well with the CAT Ultimate.

The 501 is very musical. It is somewhat more dynamic and has better response in the low bass and upper treble than the classic Koetsus. It is easily in the same league as the Helikon, Frog, better Benzs, etc. I prefer it to the vdH Black Beauty ($5k) that I owned for two years, as it is less sterile and more involving. The rating below is really not fair to this fine performer, and it forces the comparison with cartridges costing significantly more. The 501 deserves a 10 LP rating in its price class, which is really $1500-$2000 cartridges. Compared to the best, though, it earns a respectable 7 LPs.