Note: Please see Update below for the RELCAP Multicap.

Listening to capacitors. Hour after hour. One friend said I needed to get a life. Another waited anxiously for the results of the listening tests between the Sonic Craft Sonicap Generation 1 film capacitor and the VH Audio V-Cap OIMP (Oil Impregnated Metallized Polypropylene) capacitor. The value under test was 12 µF, and the evaluation platform was the high-pass crossover in Magnepan 10.1 speakers, which use just a single capacitor for the tweeter giving a first-order, 6 dB per octave crossover. 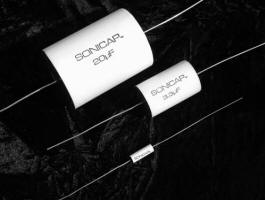 The Sonicap received many months of normal use for break-in, and the V-Cap was run-in with continuous music signals for approximately 500 hours, exceeding the manufacturer’s 400 hour recommendation. The speakers were powered by either a Conrad Johnson Premier 350 solid state amplifier or a pair of Quicksilver V4 mono tube amplifiers. The source was a Kuzma Stabi Reference turntable, Graham Phantom tonearm, Zyx Airy 3x-SB and Ortofon Jubilee cartridges going through Graham IC-70 phono cable to a Conrad Johnson Premier 15 Series 2 phono preamplifier containing Jensen step-up transformers, Oritek X-2 interconnects, Conrad Johnson Premier 17LS2 and Placette Passive preamps, and PS Audio Resolution Reference and Acoustic Zen Satori speaker cables. As you can see in the images, the Sonicap arrives in a plain white plastic package, while the V-Cap is dressed to the nines in a metallic silver jacket. The Sonicap cost $19.60 each; the V-Cap cost $81.59.

The test methodology was the following: The V-Caps were tacked to the Magnepans’ terminal plates with clear RTV (99B) and the Sonicap was “hanging in the air” above it. The signal ends of both caps were soldered in place. The other ends were connected in their turn via a 4″ lead of 14 ga Teflon insulated wire, the same wire used when I rewired the speakers. I would listen to one cap, then unsolder one end and solder in the other cap. After a number of changes, I could dis- and re-connect both caps in about 90 seconds.

The test music included the following:

On all three musical selections, and several others, it did not take long to make the following observations. Please see the Sonic Rating Scale for more information regarding the magnitude of differences. For most observations of the differences between the two capacitors, the magnitude was classified as “medium”. It would take approximately 4-5 alternations between the two caps to reliably identify the type and magnitude of differences. After that, it was easy to choose a favorite. 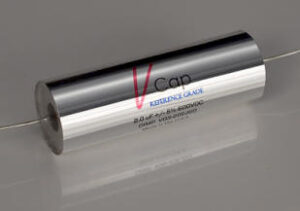 The V-Cap seemed to have slightly more extended highs and the reverberant trails lasted just a bit longer. A VERY small difference was noted for this quality. On the Michael Ruff LP, it was easier to discern that there were several background singers present when the Sonicap was installed. The V-Cap blended these voices into a single apparent voice. Also on the Ruff cut, the cymbals often degenerated into white noise with the V-Cap. The Sonicap made a more convincing presentation on Foggy Mountain Breakdown that the lead banjo, on the right, was being played by a living person because his finger work was easier to discern and follow. This was similar to the difference between a great CD and a good LP. The latter is simply more believable.

In Danse Macabre, the percussion, and triangle in particular, rang just a bit truer with the Sonicap. The triangle had a denser, more complex harmonic texture. Also with the Sonicap, it was much easier to hear that many violins were playing instead of just one, although the V-Cap presented stage depth and acoustic space just as well. The horn section was revealed to be mid-stage right with either cap, but the V-Cap gave a hint of a blatty saxophone-type sound to the trombones that the Sonicap totally avoided. After repeated listening to the first 90 seconds of this cut, it seemed as if the V-Cap inserted a subtle obscuration to the high frequencies that was absent, or at least noticeably and significantly reduced when the Sonicap was in-circuit. Hearing farther into a cleaner soundstage, one that presented each instrument more cleanly and believably, was a consistent trait of the Sonicap.

One of the tests with any recording used during the comparison period was a very subjective test of the maximum loudness that was comfortable without harshness or that feeling of stress we often hear when a system is playing too loudly. With either the Conrad Johnson Premier 17LS2 and Placette preamps, exactly repeatable volume settings were possible with either amplifier. The Sonicap consistently allowed louder listening without strain. In fact, when using the 700 watt (into 4 ohms) Premier 350, I was surprised to notice how loudly the little Magnepan 10.1s could play without strain, or suffering a melt down. It was possible to listen longer, and louder if desired, with the Sonicaps installed before any hint of listener fatigue began to be an issue.

This comparison can be a lot shorter than a regular component review because only half of the audio frequency range is affected! The results were consistent and significant: Sonicap Generation 1 caps, when used in this application, had higher resolution, lower apparent distortion, and offered greater listening enjoyment than V-Cap OIMP capacitors. In any other application, YMMV!

UPDATE, March 2006. Let’s talk about the Reliable Capacitor Multicap. The Multicap was used in a slightly different speaker: the Magnepan MG10. The MG10 is an older model than the MG10.1. It is taller than the MG10.1 by 10 inches, and due to its larger radiating area, can play louder without sounding like it is approaching the maximum output. Other than that difference, the two speakers sound very similar. Like the MG10.1, the MG10 also uses a single capacitor for the high-pass (tweeter) crossover, but the value is 8 µF instead of the MG10.1’s 12 µF capacitor. For this comparison, the very kind folks at Reliable Capacitors (RELCAP) sent a pair of 8 µF PPFX-S, which are polypropylene film & tin foil, and a pair of .01 µF RTX, which are polystyrene film & tin foil. The RTX caps will be used in parallel with the larger value caps as a bypass. More on the bypass concept later.

After 200 hours of break-in on the Multicaps, it was time to get down to work. Using the same methodology as above, this time comparing the 8 µF Sonicap to the Multicap (without bypass), it seemed the two capacitors were very similar in overall tonal balance. Once satisfied that there were no large differences, I left the Multicaps in place for extended listening.

After about an hour, I felt I should check the stylus on the Ortofon Jubilee phono cartridge because it sounded exactly like a worn out needle with high frequencies that were rough and had a lot of grainy “white noise” content instead of clear, clean and airy sounds. The stylus looked fine, so I substituted a just broken-in van den Hul Condor XCM cartridge (review in progress). Now whatever ideas you may have about this cartridge, there is no way you could call the high frequencies grainy or even hinting at that dreaded white noise sound. However, that quality was consistently audible with the Multicaps, but not with the Sonicaps. This result was quite a surprise because the VTL TL5.5 preamplifier, which uses Multicaps and made me want to try them for this mini-survey, is one of the cleanest, most open sounding components I have heard. This just shows that blanket recommendations are not possible in this hobby where component interactions can completely surprise us with unexpected results.

Mundorf Silver/Oil. Many of you suggest that this is the best crossover capacitor available. I agree. It took a long time – about 250 hours – to settle in, although the sound was fairly stable after about 100 hours. For about $85 each (8 µF), the silver/oil caps offer a very small improvement over the $16 Sonicap across almost the entire audio frequency range. The bass is just a hair more powerful and detailed, soundstage depth increases slightly, and treble purity also improves a bit. The midrange is equivalent with either the Mundorf or the Sonicap Gen 1. Please note that these were small improvements and although present, did not increase my enjoyment of the music or reveal new detail that was not already presented with the Sonicap.

Bypass capacitors. In addition to the Multicap RTX, I have tried either .1 µF or .01 µF bypasses from Sonicap (Gen I and the Teflon® Platinum cap), Hovland, AudioCap, and Wima. In every case the results were similar. Let me digress for a minute or so (depending on how fast you read) and talk about crossovers.

So why use a bypass at all? There are actually components of very high frequencies in some audio waveforms. Some are high order harmonics. If you think of a square wave, the right angles at the top of the wave are extremely high in frequency. Sometimes there are high frequency components in very fast audio sounds, for example, the instantaneous tap of a drum stick on a cymbal. These are the sounds that should be “helped” by including a small-value bypass capacitor in a high pass crossover.

Well, I don’t think so. If the 8 µF capacitor blocks frequencies below 5000 Hz and passes frequencies above 5000 Hz, why do we need what is actually another crossover for the same tweeter, but operating at frequencies already passed by the big cap? I am sure engineers have a very good reason, and a couple of them have tried to educate me on this subject. I respect the science and electrical theory on this subject, and my technical background helps me to understand it fairly well. But there is one small problem: the bypasses all sound bad! They add a quality that at first sounds like an increase in air and detail, but after a couple of hours becomes an intrusive harshness and discontinuity in the upper treble. Remove the bypass: all of the detail is present but without that grating and annoying sound. The high frequencies are cleaner, smoother, and much more enjoyable. It doesn’t matter if the bypass cap is Teflon®, polystyrene, or common polypropylene, the results are very similar. And to be avoided.

Conclusion: Of the three capacitors evaluated in this application, the Mundorf silver/oil was objectively the best performer. It provided the best clarity, resolution, and transparency. However, if I was doing this project without the agenda of evaluating different capacitors, I would use the Sonicap Gen I because the small improvements I heard when substituting the Mundorfs were really only apparent on direct comparison. The Sonicaps offered the same level of musical enjoyment for far lower cost.