I can’t tell you what to buy. Even if I found the perfect component…well, what is “perfect”, anyway? Take an amplifier, for example. Let’s say that I thought that the Cary 300SEI amplifier was the absolute best amplifier on the planet. In my room and with my speakers, it just might be the best choice out of the hundreds of other amplifiers out there. But if I changed speakers, or installed my stereo system in a larger room, even those glorious 15 watts might not be enough. System matching, room considerations, and lastly but no less importantly, your personal listening tastes all play critical roles when assembling a great audio reproduction system.

The system is important because of the considerations of gain, impedance and synergy with other components. This synergy recognizes that no component is perfectly neutral in character, so for example, a bright or forward cartridge could be compensated for by using a mellow or soft sounding interconnect cable or phono preamp. The room (and speakers) will determine the amount of power your amplifier requires, in addition to the room’s “sound”. If it is hard walled without coverings or carpeting, the room might be bright and reverberant and suggest a softer sounding system. And your taste determines what sounds good to you. If you aren’t enjoying the sound from your system, it is irrelevant how good it may sound to anyone else.

This brings us to the two very good sounding moving coil phono cartridges under review. Either cartridge could provide exceptional performance, depending on your SRT (system, room, taste). They are both worthy of your consideration; however, they are probably not interchangeable and would not play equally well for you. 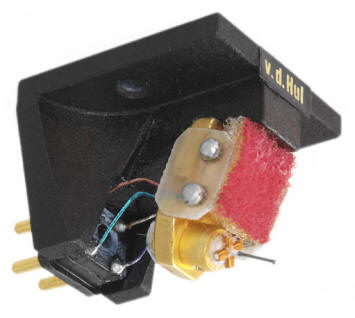 The van den Hul Condor is basically an upgraded Frog without the body, while adding the cross-shaped modulator of the top-of-the-line Colibri. These “nude” designs dispense with the body to eliminate resonances. When your phono stage amplifies the tiny voltages from your cartridge 1000 to 2000 times, even extremely small resonances or distortions could be quite audible. To decode the model designations, the XCM has the cross shaped modulator, matched crystal copper wire coils, and a metal body. The XGM is the same but with matched crystal gold wire coils. I chose the metal body version over the plastic body because of my experience with the Black Beauty several years ago. It had a plastic body and I stripped one of the threads with what I considered to be reasonable force tightening one of mounting screws. No worries with the metal bodies on the Condors!

I started listening to the XCM (copper) and a then few months later installed the XGM. After about 80 hours, the XCM was making very enjoyable music, which continually – and slowly – improved as the cartridge accumulated more hours up to about 200 hours. The added break-in improved the smoothness of low-level detail in the upper frequencies, and added just a bit of weight in the bass. One of the first attributes of the Condor I noticed was the exceptionally dynamic character. Punch, slam, and pop are all there at a level that makes almost any other cartridge sound muted or restrained. The dynamic ability of either Condor exceeded every other cartridge I have heard recently, including the Zyx Universe.

Both Condors have very deep, powerful, and detailed bass. The XGM adds an extra measure of resonant depth to the mid and upper bass (~50-120 Hz) that would be welcome in many systems. The midrange performance of both versions is very enjoyable, and also satisfying in the long term. Both male and female voices have realistic tonal qualities and communicate the meaning and feeling of the performers. When several voices are present, it is simple to hear each individual voice in the mix. Complex music is also handled very well without becoming a wall of indistinct sound.

It is in the upper frequencies that we hear more of the distinctive character of the copper and gold coils. The copper Condor is fast, incisive, and sparkling, but not bright. It is a very good performer with excellent recordings, bringing out detail and spatial cues that are barely noticeable with other cartridges. This can be a benefit or a detriment, depending on the quality of your records. The records should be in excellent condition, and also very clean and completely free of dust, beer stains, peanut butter, etc. The gold Condor is kinder to older or more common commercial recordings. When playing audiophile discs, it offers a small but noticeable increase in upper midrange and treble warmth. This is not to say the XGM is categorically better than the copper version, but that in many SRT systems, the gold version could provide greater listening enjoyment. It is one of the highest resolution cartridges in my experience.

The XGM offers a bit more distinct layering or depth to orchestral recordings, and just a hair more clarity in the far reaches of the stage. The XCM is just a bit better at lateral stage definition, and offers a bit more of a feeling of the exact space of an individual performer. This is noticeable on direct comparisons: both cartridges have above average 3D presentations.

A few comparisons to the Condor XGM (allowance should be made for time and equipment changes between listening to many of these):

Interestingly, one of the impressions of the XCM was that the midrange reminded me of the lovely midrange of the Koetsu Urushi. Even though the XGM did not generate the same mental connection, I preferred the gold Condor long-term. It is more like a richly flavored red wine compared to a chilled white, which suits my SRT better.

The Condor XCM-LO carries a US list price of about $4500 and the XGM is about $5000, depending on the value of the dollar against the Euro. The extra $500 is well worth the cost due to the increase in compatibility with less than pristine recordings. One of the attractions to van den Hul cartridges is the very reasonable retipping charge: $500. If the stylus lasts for 3000 hours, that gives a per-hour music cost of 17 cents per hour. In contrast, a Koetsu Urushi has a retip charge of $1800 which will cost you 60 cents per hour of listening.

The nude design and loose, exposed wires make these cartridges very fragile. A wire on one cartridge broke after about 6 months of careful use and the cartridge was returned to the factory for repair. Any reasonable consumer, especially a buyer of a luxury item such as this, would be confident that the repair would be handled under warranty. I was shocked when the failure was blamed on customer abuse and told there was a repair charge of $550! On the plus side, it was returned in about three weeks. After this experience with the poor factory support, I never felt comfortable using the vdH products and sold them after this review was completed.

Either Condor can be recommended if it synergizes with your system and if you are very careful when handling and cleaning. They can be ordered to match almost any tonearm made today with your choice of body and output voltage. They sound very good: generally neutral from the lowest bass to highest treble, powerful, smooth and refined but highly detailed, and hugely dynamic. A lot like live music. Just keep a spare cartridge.