The VPI Scoutmaster Signature turntable is a veritable beast. Weighing in at 48 pounds without hernia-inducing options like the outer ring clamp, Gingko dustcover, Delrin clamp, or upgraded platter, this is one solid machine. That was the first impression that came to mind when I first beheld the Scoutmaster: density, solidity, mass. (The Doc’s question to Michael J. Fox in that memorable movie could be paraphrased here: “Marty, why are turntables so heavy in the future?”) With its double plinth and a piece of solid steel sandwiched in-between, the VPI makes my current rig, the Roksan Radius V, look like a couple of pancakes by comparison. As I unboxed the Scoutmaster and began setting it up, I thought to myself that in an age of cheaper and flimsier goods, this ‘table seems to be worth every bit of its hefty price tag. And that includes the fact that my version has the upgraded Nordost tonearm wire, and new, controversial, VPI antiskating device, which ups the ante to a not inconsiderable $3,000. Is this behemoth of the analog world really worth that much cash just to spin your records? 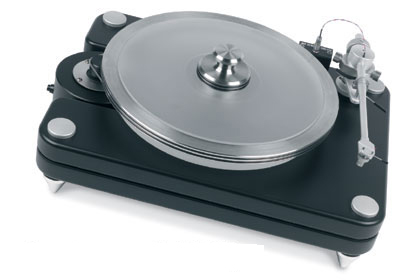 The Scoutmaster is something of a hybrid of the best of a number of the New Jersey company’s proven turntable technologies. Since I’ve owned the Scout and many may know it better, think of a Scoutmaster as that turntable on steroids. As noted above, rather than the single plinth, you get two 1-1/8th thick pieces of dense MDF with a 12 gauge steel plate to reduce external resonances. The VPI is the opposite of a suspended ‘table and if you have a hankering for that sound you won’t find it here. It uses the huge acrylic platter from the Aries model and is a beautifully machined bit of gear. The independent-standing motor is plucked from the Black Knight; 300 RPMs of purring power that is very quiet and accurate as well, given the measurements I made of its speed stability. The arm is the JMW-9 Signature, a unipivot design with Nordost Valhalla wire from the cartridge leads through the junction box. In spite of its heft, this is an easy unit to set up, allowing for precise settings of VTA, VTF and azimuth. Though new users of a unipivot arm may be a little intimidated when you set it on to its single pivot. Go for it.

For the first time on his tonearms, Harry Weisfeld has added an antiskating mechanism which is not enabled when the Scoutmaster ships. Again, it is an easy set-up, but the manual advises that every ‘table they listened to at VPI sounds better without the antiskate. Hmmm, trust your ears! I tried it both ways, and in all honesty cannot hear a difference. Let the controversy begin. Clearly what we have here is a Frankenstein hybrid of the best of a number of advancements from this venerable company. But is the totality greater than the sum of these sturdy parts? Do they all come together into one seamless whole, or does this unusual polyglot leave the vinyl lover wanting?

On my enormous professor’s salary (plastic anyone?), I’ve had a number of different cartridges on the VPI since I set it up this past winter. Thanks, by the way, to Todd the Vinyl Junkie. Todd did yeoman service to guarantee that some of the problems I had with the first Scoutmaster he shipped me were quickly cleared up. He was also kind enough to send me his personal Shelter 501 Mark II cartridge to audition on the VPI, a combo he considers a particularly good match. Todd is one of the reasons we get into his crazy business in the first place, and has been a real pleasure to deal with. In addition to the Shelter, I have tried my trusty Grado Sonata, a Denon 103R, and the new Benz Micro MC20E II on the Scoutmaster. (I have a review forthcoming of the latter. Preview: it is a great buy for two Franklins). I have also listened to the VPI through a cute little Pro-ject Tube Box II with some Sovtek 12AX7 thermidors, as well as my usual Monolithic Sound phono pre and the other gear mentioned in my review of the Roksan Radius V (which I’ll compare this ‘table to).

I am glad I had so many different cartridges to play on the Scoutmaster. They helped me characterize its essential quality: accuracy. This turntable does not romanticize, nor does it impose its own sound on the music in any way I can discern. Having swapped out all four cartridges numerous times I can attest to that. I hesitate to use the term neutral because in the ears of some audiophiles it connotes sterility or, worse, a kind of sonic banality. But that’s exactly what you get here. Slap in the Grado and its fulsome midrange comes through the VPI unclouded. Or switch to the Denon (which I like so much) and there is that balanced, unhurried and unflustered sound. Only now, unlike the Roksan, the VPI tells me that the Denon has a little too much bass for its own good, and also has a slight opacity to it that you can’t hear through the cheaper ‘table. What a revealing device the VPI is. A double-edged sword?

Listening now to Clannad’s Magical Ring (Enja’s first band), a fantastic pressing of Donald Fagen’s new “Morph the Cat” on Reprise, which led to Steely Dan’s Gaucho, 10,000 Maniacs “In my Tribe” and an incredible Living Stereo recording of Prokofiev’s Seventh Symphony, I can easily hear the differences from one LP to the next. Whereas the Roksan Radius V, and frankly the VPI Scout, too, tend to homogenize the sound of recordings (the former in a euphonic and pleasing sense), the Scoutmaster lets it all shine through. Each aspect of your LP’s music – top to bottom – are effortlessly revealed with this ‘table. For example, the Gateway I’m typing this review on is in the far rear right-hand corner of my listening room, and yet I can clearly pick out all sorts of distinct musical details from my far stage-left Soliloquy speaker. Channel separation is astounding, and the information the tonearm wired with Nordost Valhalla pulls off LPs is jaw dropping at times. Some of that has to do with the sheer silence of this deck. I can hear deeply into a soundstage as I never have before on a vinyl playback device. Never. On a quiet LP like my Sonny Clark Cool Struttin’ on Blue Note, the silences in the music seem as profound as the notes themselves. (Something I’ve only heretofore been able to say about good CDs or SACDs).

Let me add this bit of controversy. Listen to great bass on vinyl in any musical genre from jazz to classical to hard rock. (Start with the player on Cat Steven’s “Tea for the Tillerman”, if you need a recommendation). Then listen to the same recording on a good CD. There is no comparison. The bass on the vinyl is real, organic, true, present, like CD will never be. The VPI Scoutmaster in particular will tell you this – allow you to follow the organic flow of a bass guitar or upright bass. No digitalized bass sounds like the instrument you will hear in a live club, or at the orchestra. I was sitting next to the bass section in the Eastman theater listening to the Rochester Philharmonic just a few weeks ago. Trust me, I know. Anyone who thinks these playback mediums are even vaguely comparable simply has not A/B’d them. The bottom octaves on a great ‘table like this shine through.

On well-recorded LPs vocals have astounding clarity. I was playing Joni Mitchell’s live album “Miles of Aisles” and delighting (not too strong a word) in her repartee with the audience. Having played this LP dozens of times, I thought I was totally jaded to this verbal exchange. But with the Shelter cartridge and the Scoutmaster combo in particular, I laughed along with the audience’s requests for her greatest hits. All good stereo gear has that ineffable ability to draw you into great music that is well recorded. This big boy does it without a whimper. Total engagement.

Downsides of the ‘Master? There are, perhaps, a few. On not so well recorded LPs (and believe me, reader, they are legion), the Valhalla tonearm wire and this quiet deck are simply not kind to them. Records that I find quite listenable on my Roksan, or now retired Rega are, if not unplayable, then in parts, unbearable. The ability of the VPI to slice and dice bad vinyl is something I did not like about the Scout and don’t particularly like about the ‘Master either. In many ways the exactitude of this unit is simultaneously a strength and weakness. This revealing quality can be ameliorated somewhat with proper choice of cartridge (I’d love to hear a Koetsu on this thing, Jerry??), but not completely relieved. There is also the feeling that in some ways a little ‘table like the Radius V does serve the music better. By that I mean that if the Roksan is adding a homogenization, a fulsome nature, to most recordings, it is always a pleasant one.

But that’s about the only criticism I have of this turntable from the land of the Sopranos. In all other critical aspects, the VPI Scoutmaster is an utter success. The sheer amount of unforced detail that I hear off recordings that long lay buried (and much of that with a $200 Benz), is frankly amazing. There is also that pride of ownership phenomenon. Even the most jaded music fans gravitate to the Scoutmaster when they come into my listening lair. Hey, don’t touch – fragile! It is too beautiful a machine not to feast your eyes upon. There is no way I could go back to the Roksan after hearing what this gorgeous looking device can do. Yes, the VPI Scoutmaster is definitely greater than the sum of its parts. I look forward to spinning discs on it for some time to come.