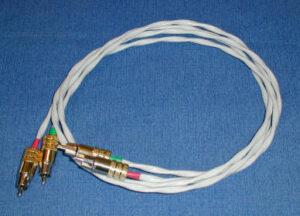 Physically, the interconnect is shielded 18 gauge silver-encased high-purity copper with Teflon insulation and a tight Teflon outer jacket for resonance control. The outer jacket is either white or clear Teflon. The Special Phono cable uses the same general construction, but the 30 gauge conductors are pure silver. The strength of Window Cable is that it takes the understanding of neutrality to a new level. Usually, when a cable seems to excel at exposing previously unheard details in familiar music, it is because the upper midrange or lower treble is pushed forward and highlighted. Window Cable does not highlight anything; there is just more music to hear. This is quickly apparent from the midrange up to the highest frequencies, and takes just a little while longer to realize this transparency extends to the deepest bass, as well.

Window Cable is all about proportion. Stringed instruments and woodwinds, for example, present very complex harmonic tones at higher frequencies. It is usually these low-level harmonics that give much of the character to the instrument. If these harmonics are presented out of balance to the fundamental tone, or are lost due to a fault anywhere in the music chain, these instruments sound artificial and will never “take you there” and make you believe the music could be anything but recorded. With Window Cables, all instruments are much more believable. With a good recording it is much easier to imagine the music is live. There are significantly more moments, often lasting for an entire recording, when music is completely satisfying rather than just an occasional song that sounds really good. You know what I mean.

The real strength of Window Cable is it’s ability to pass seemingly unlimited low-level information, or at least an order of magnitude more than I was used to hearing. This new-found information was previously obscured or distorted by lower performance cables, some of which are very expensive. I heard things on almost every recording, recordings that I have listened to for many years, that I previously did not know were there. What was new in my experience was that instead of my system almost straining to offer this increase in resolution, the entire presentation actually relaxed and became more real, not more “hi-fi”. After about 20 hours of break-in, I knew that these cables were not going anywhere, and that feeling increased over the next hundred hours or so until the cables were fully settled in. The “believability index” increased as each interconnect in the system was replaced, until the entire system was wired with Window Cables.

These cables, like almost every other component, have an identifiable character. They are slightly forward relative to some other cables, meaning they have a bit of extra energy in the upper midrange and lower treble. As such, they are not a universal recommendation, but are still superior to many other cables on the market. There is a downside, though. Their overall neutrality and transparency makes lousy tone controls, grunge filters, bass boosters, shimmer enhancers, vocal warmers, or whatever you might be purposely looking for in a cable. Jack Nicholson says, “You want the truth? You can’t handle the truth.” Inferior components may sound worse without typical “system-matched” cables with a definite sonic character, but good components will sound better. Possibly a lot better. These are near reference-level cables that you could build a great system around. If it cost $1000 or $2000, it would be a recommended cable, but at the asking price of $250 per meter pair, it is not even an option whether to try it or not. So there you go:  short and sweet.

Important Note: Sales and marketing of this product have ceased. To those of you who were lucky enough to acquire some while it was available: Congratulations. You are very fortunate. To others who waited too long to reach a purchasing decision, as the saying goes, “you snooze, you lose”.