The Wyred 4 Sound STP-SE line stage preamplifier was originally introduced in 2009 and has been gradually updated and improved over the years. This latest, top of the line model includes many parts and technology that we find in cost-no-object preamplifiers from some of the most respected and expensive brands.

There are three variants of the STP-SE preamplifier. All are available in basic black or silver and include over 164,000 uF of capacitance, more than many power amplifiers. The STP-SE, $1999, includes such refinements as low ESR “Super Cap” capacitors and Kimber Kable wiring. The STP-SE with the Stage 1 upgrades is $2849 and adds Schottky diodes, premium inductors and 24 expensive Vishay Z-foil resistors located in the resistor ladder volume control. The top of the line STP-SE Stage 2, under review here, includes a premium fuse, an upgraded IEC inlet​, proprietary Wyred 4 Sound discrete voltage regulators, 48 Vishay Z-Foil resistors, 16 upgraded high frequency filter capacitors, and a green OLED display, all for $3749. The preamp is available for any voltage worldwide.

The “STP-SE-2” has a unique volume control scheme. First, the volume control operates by switching among those 48 expensive and very low noise Vishay resistors. There is some noise from the relays when the volume is changed. Second, the preamp operates as “passive” with only fixed-gain buffers in play until the volume control is above 64, at which point an additional active gain stage is engaged. There are two noise figures specified: a very low <18uV for the active stage and an extremely low <6uV with buffers only. My usual volume settings are in the 20-50 range, so the additional gain volume settings, above 64, where auditioned only for review purposes, with reduced volume provided by JRiver Media Center.

The preamplifier is fully balanced from inputs to output and includes 2 balanced XLR inputs and 3 unbalanced RCA inputs. There are 2 balanced and 2 unbalanced outputs, and excellent remote trigger connections. The small remote control can adjust volume, source selection, display brightness, power, channel balance, HT bypass, phase, and mute. The remote operates over a very wide range of angles up about 75 degrees off center. When you un-mute, the volume quickly increases from silence to the previous volume setting, preventing sudden explosions of sound. The preamp provides great connectivity and controls, including a complete set of adjustments on the soft-finish remote. The 5-year warranty is transferrable during the first year. 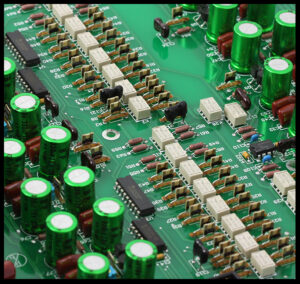 The STP-SE-2 was new when received and was given over 200 hours of break in before the critical listening began. As expected, the preamp sounded sharp and thin before about 50 hours and just kept getting smoother and more refined as the hours accumulated. The full break in took about 300 hours. Sometimes it seemed the sound was slightly warmer/less crisp with the display turned off. Unbalanced unity gain can be found at a volume setting of 34, where voltage in = voltage out. 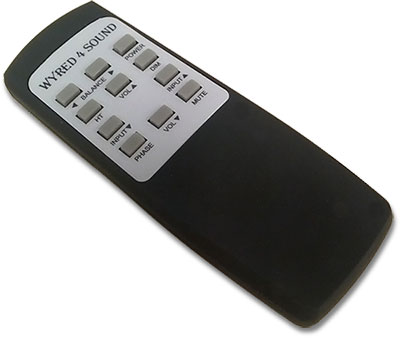 One very welcome feature of balanced XLR connections is the ability to bypass the preamplifier without adding any other connectors or components. With the volume controlled by JRiver Media Center, a fairly large number of A/B comparisons were performed with and without the STP-SE-2 in circuit. Any audible change that occurred by running the signal through the STP-SE-2 vs. bypassed was very small. There is a very slight and elusive hint of a solid-state edge when the volume control was in the active range above a volume setting of 64, but below that level it is not apparent that there is any sonic contribution from the Wyred 4 Sound preamplifier.

The sound of the digital source computer/DAC, with its own volume control, connected directly to a power amplifier, is arguably and observably identical to the sound with the STP-SE-2 in use, connected between source and power amplifier. I say “arguably” not to hedge an opinion, but to make it clear that any sound of the preamp was only minimally, but not consistently observable with numerous A/B comparisons. Of all the components used in this review, the STP-SE-2 has the smallest impact on sound quality. This is the closest that this audiophile has come to realizing a true “straight wire with gain” component. There was a recurring thought during the review period: “I could live with this preamp long term”.

The low frequencies have serious grunt and control. This preamp will definitely not be a weak link in providing great bass reproduction in your system. The power and definition in the bass was shocking, at first, and then is “only” excellent. It certainly sets a performance benchmark in both dynamic power way down deep and also in resolution. For the first time ever, I engaged JRiver’s Parametric Equalizer to provide -2 dB at 40 Hz and -3 dB at 30 Hz because the house was shaking with cuts from Keith Urban’s Ripcord and Yello’s Baby CDs. These CDs were ripped to 16 bit 44.1 kHz WAV files which are set to upsample in JRiver Media Center to 32 bit 176 kHz. For upsampling, 4x the original sample rate works well.

Discussing the midrange and treble as separate characteristics is pointless because the STP-SE-2 delivers the entire audible frequency range as one completely coherent, very high resolution, and unaltered continuum of sound. If the treble on a particular recording sounds processed and aggressive, the midrange does, too. If a different recording offers wonderfully human sounding midrange, the treble is also beautiful, clear and open and very extended. The STP-SE-2 offers the see-through utterly unprocessed sound quality in the mid frequencies of a passive preamp along with noticeable improvements in the bass and upper treble. The main concern of “going active” is the potential loss of that see-through character. Fear not: the STP-SE-2 avoids sounding at all electronic and preserves the full measure of see-through transparency and musical involvement of a good passive “preamplifier”. The Acoustic Imagery Jay-Sho is a true passive (autoformers) preamplifier, providing up to +7 dB of gain.

The soundstage is excellent, with above average height. Precise lateral images are common, with a consistent feeling that the artists are presented in 3 dimensions, not as flat 2D performers. The Levinson No. 52 preamp offers a slightly deeper soundstage way back in the corners, while the STP-SE-2 is just a bit better with the more centered, downstage performers.

Don’t insult this preamp – or your ears – by feeding it from a marginal, low-fi source. The W4S preamp’s neutrality and sheer transparency will not provide a band-aid or act as a tone control to offset problems with other components. This lack of character is very valuable for reviewing other gear and easily places the Wyred 4 Sound preamp in the category of Reference Components, which is unheard of at this price level. The two requirements for an audio component, ultimate resolution and linearity in that resolution from low bass to top-most treble, are delivered in full measure with the Wyred 4 Sound preamplifier.

This question must be answered if this review is to have any meaning and relevance:
Do we judge a component based on how it sounds on the majority of average quality source material in our collections, or on how mind-blowingly wonderful it sounds on the smaller number of excellent recordings? If the former, then the small sweetening effect, one result of the softer, more “tubey” treble range of the new $9500 two-chassis Pass XP-22 preamp might cause a preference for the more expensive preamp. If there is a component in your system with a strong character, then the $6000 PS Audio BHK Signature preamp, “tunable” with different vacuum tubes, might be a better fit in your system. However, the BHK Signature falls far short of the benchmark level of purity and transparency offered by the Wyred 4 Sound preamp. The STP-SE-2 has a completely clean, very extended and open – but not forward – upper frequency range in absolute terms which is easily observed compared to bypassed, when the M and F XLR connectors are plugged in directly to eachother. The STP-SE-2 consistently delivers that mind-blowing sound quality and involvement with good recordings. This is how we judge a component.

It is easy for a reviewer to burn a lot of words describing something. However, there just isn’t much that can be said about this unit’s very minimal and elusive sonic character. The Wyred 4 Sound STP-SE-2 preamp is unremarkable, and that is precisely why it is so special. It easily beats much more expensive competition with its benchmark, state of the art resolution and lack of character. So now we revisit the recurring thought from the audition: “I could live with this preamp long term”. I acted on that idea and purchased the review sample. Remarkable!

This review would not have been possible without the kind and generous support of EJ Sarmento of Wyred 4 Sound. Thank you, EJ!