A lot has changed with these high performance 2-way speakers since I reviewed the original version of the Kipod loudspeakers. The enclosure was undated with hidden corner bolts, cleaning up the front panel appearance. There is a single pair of binding posts on the rear which fits with my preference for not bi-wiring. The tweeter has been significantly upgraded with YG Acoustics’ proprietary ForgeCore™ in which “in-house CNC-cutting introduces sophisticated 3D geometries into the motor system”. 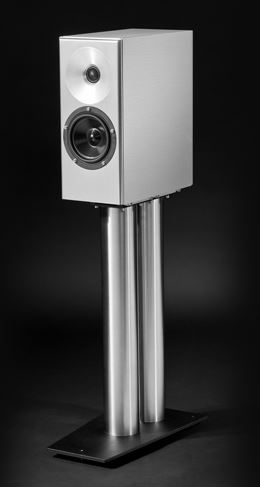 Most noticeable in the new version is the BilletCore™ woofer cone which is machined in-house from large pieces of solid aircraft-grade aluminum. Strengthening ribs are machined in to the back of the cone surface during the same cutting process so the cone and ribs are all part of the same piece of material. This cone does not flex at any audio frequency and is very light in weight. The results are an improvement in dynamics from the reduced moving mass and an audible reduction in distortion.

The “Signature” version adds crossover components that boosts output capability by limiting low frequencies. Importantly, it accomplishes this without introducing phase shifts in the lowest frequencies. The result is a further reduction of distortion in the midrange.

Please see my November, 2010 review of the original Kipod. Keeping in mind the outstanding performance of that model, let’s focus here on the how the new speaker differs. This won’t take long which is good because I don’t want to spend time writing about the Kipod II Signature when I could be listening to them in the adjacent listening room. I hear them playing in the background, and, believe me, I want to be THERE and not HERE. Nothing personal.

First and foremost, the cumulative reduction of distortion, already at state-of-the-art levels with the original model, is immediately obvious. The sound is less recorded and more alive. The greater purity, ease, naturalness, and believability is very easy to hear. While the original Kipod is a fine speaker, the “II” is like adding another 20 years to the age of an already fine scotch. Yes, they are from the same maker, but the added refinement, subtlety, smoothness, and simple enjoyment is greatly enhanced.

A result of this reduction of distortion is greater resolution. This is apparent across the entire frequency range of the Kipod II, from about 50 Hz to the upper limit of my hearing. Importantly, this sense of hearing more of every note is real, not an aberration of a forward lower treble or other narrow-band frequency anomaly. In fact, the “II” sounds more linear in both frequency response – if that is even possible from the remarkably flat response of the original Kipod – and harmonic resolution. The quality of sound is the same at any frequency.

The improvement in resolution also benefits the virtual sound stage. The apparent size of the recording space in larger: taller, wider and deeper. Each performer is more 3-dimensional, more solid, and more believable. The listener’s ability to visualize the locations of individual instruments, even in an orchestra with many performers, is also enhanced.

The second significant improvement with the Kipod II will change some people’s opinion of YG Acoustics. Some of the initial reaction to both the original Kipod and the Anat models was a feeling that they might be just a bit too analytical in the upper frequencies, adding a touch of coolness to the sound. While I occasionally heard a hint of this character, since it was only apparent sometimes, I usually attributed it to the recording and not to an inherent personality trait of the speakers. In the new model, that elusive hint of character is gone.

The Kipod II offers such a remarkable level of faithfulness to the music and extreme resolution that removing the woofer’s 5-point thin metal “spider grill” is immediately audible. It is magnetically attached and removal is instant. This is a speaker capable of re-producing whatever you feed it, from any source, at levels better suited to medium sized rooms than the earlier model. This will not require extreme expenditures for quality electronics, but those electronics should not evidence any coarseness or grain, as these will surely be exposed.

The Kipod II Signature is a very worthy successor and further evidence that YG Acoustics has remarkable talent in creating cutting edge, high performance loudspeakers. The new drivers and crossovers advance the state of the art of loudspeaker design, and the resulting in-home performance advances the state of the heart of musical enjoyment.

Note on the rating: The YG Acoustics Kipod II Signature earns this superlative rating. The original Kipod, at the time of the review, also was deemed to perform at the 10+ LP level. Per Note 3 on the Reviews page, the rating for the original Kipod has been lowered to a still-outstanding 10 LPs.