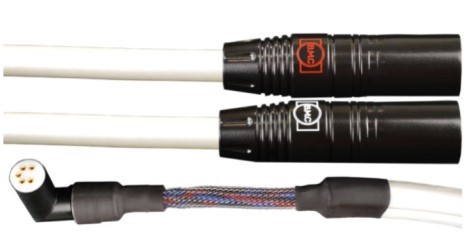 B.M.C. Audio is a familiar name here at 10 Audio. Their wonderful MCCI Signature phono preamplifier, in various iterations, has been a reference for several years. Their new MonoS cables are based on Mono crystal OCC (Ohno Continuous Casting) Silver conductors:  MonoS.

Origin Live also lives here at 10 Audio with the reference-level Agile tonearm, platter mat, and Gravity One record weight in daily use. The new Origin Live Silver Hybrid 2-S tonearm cable replaced the Silver Hybrid S cable (£535) that came with the tonearm. The 2-S version cable shares the same construction, which is built from copper and silver litz wires, and employs additional treatments to the silver. The price of the 2-S cable is £1,130, approximately US $1,540.

B.M.C. comes before Origin Live in the title of this review for the simple reason that ‘B’ comes before ‘O’ in the alphabet. Please use the links at the bottom of the page for more technical information on these excellent products. Both cables are available with straight or right-angle DIN connectors, and either RCA or XLR connectors on the preamp ends.

Both cables were auditioned on the Origin Live Agile tonearm mounted on a Clearaudio Ovation turntable with Battery Power Supply. Other components on hand during the review period included a ZYX UNIverse Optimum and Miyajima Destiny moving coil cartridges; Pass XP-25 and BMC MCCI ULN phono preamplifiers; Soulution 325 with phono, Pass XP-22, and Benchmark HPA4 preamplifiers; a slew of power amps including Valvet E2 SE and Benchmark AHB2; and Magico S1 MkII speakers which are lightly augmented in the low bass with a pair of JL Audio e110 subwoofers. The audio cabling is Audioquest WEL Signature and Mogami interconnects and speaker cables. USB cables are Straight Wire USB-F. Power protection and purification are provided by a PS Audio Dectet for the preamplifiers and source components, and a PS Audio Quintet for the power amplifiers. The Quintet includes a standard 1/8″ trigger connection for remote turn-on and -off of power amplifiers that lack a 12V remote trigger. Power cords include my DIY power cord, and Straight Wire Pro Thunder. 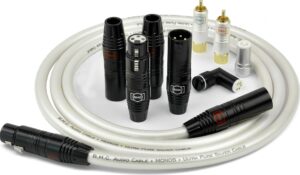 In the product category of audio cables, probably no type of cable is more system dependent than a phono cable. This is due to several factors. Where a CD player or DAC usually has output voltages in the 2-4 Volt range, a phono cartridge output can be one thousandth of those values. Significantly, the minute musical details that convey the size of the soundstage and recording venue, harmonic content and nuance in vocal inflection are measured in the microvolts, or millionths of a Volt. These very tiny voltages can easily be damaged or obscured by cables with incompatible inductance or capacitance, noise, or from construction issues. Also, the range of phono cartridge output voltages, from about 0.1mV to 5mV – a range of 50x – and the cartridge impedances, also having multiples of difference between various cartridges, all can affect the optimal choice of a phono cable.

So it is with this understanding that we look at the performance of these two phono cables with two very different phono cartridges, with a clear expectation that YMMV. The ZYX UNIverse Optimum moving coil cartridge, $17,000, has a DCR (resistance) of 1 Ohm and an output voltage of 0.15mV. The Miyajima Destiny, also a moving coil, $7,500, has a DCR of 16 Ohms and a rated output of 0.23mV. You do the math: these cartridges are in different worlds, electrically speaking.

The B.M.C. MonoS cable, $1690, immediately impresses with a very open and clear character. There is no sense of stridency or glare, which can often accompany this level of purity and transparency. The MonoS seems to transmit another layer of refinement of crystal clarity to the Magico speakers’ diamond-coated beryllium tweeters.

The bass is both powerful and detailed, and this character continues into the midrange. Voices are presented with a great sense of hearing the singer from the direct mic feed; the level of connection to the artist is very high. While there is actually no such thing as a “transition” from the bass range to the midrange, or from the midrange to the treble, music simply flows across the music spectrum in a very linear manner, just as with live music. However, there is no denying the usefulness of our ideas of bass, midrange, and treble to describe sounds.

The greatest strength of this cable is the wonderful character of the soundstage and the strong sense of ambiance and air. The B.M.C. MonoS cable delivers the largest 3-dimensional acoustic environment that this listener has ever heard in this music room. Performers float in air, with sometimes startling placement on a very specific virtual stage. Looking directly at a performer’s location is common, along with the increased believability that this brings to the entire performance. Importantly, the perception of the depth and height of the sound field can be exhilarating, recreating a truly 3-D venue as the recording demands.

I was able to spend more time with the Origin Live cables, both the S and the 2-S cables, so my listening notes are more extensive. The Silver Hybrid 2-S cable replaced the Silver Hybrid 2 phono cable that had been requested with the Origin Live Agile tonearm. This was not a subtle, only for “golden ears” level of upgrade. While the improvements are not the earth-shattering, grab the checkbook, put the older cable in the trash, paradigm-changing type of upgrade, the upgrade is most definitely worthwhile. 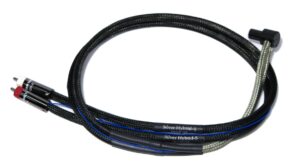 Compared to the original cable, the 2-S seems quieter, as if the signal-to-noise ratio has increased by a rather large number. This results in the increased depth of every note along with that note’s harmonic content. The entire quality of sound is incrementally better in every way with increased texture and density.

The soundstage is also better:  larger and more specific. This is especially noticeable towards the rear of the stage, and which requires finer resolution to effect any change in the listener’s perception. Sounds happen in their own space, naturally detached from all the electronics involved in bringing the performance to you. Each performer stands in greater relief, more tangible and solid, contributing to many moments of virtual reality.

Listen to “Day at the Dog Races” on the Little Feat LP Time Loves a Hero, Warner Brothers, 1977. This record is very well recorded and produced, with powerful dynamics, outstanding drum work by Richie Hayward, and signature Little Feat arrangements. Ted Templeton’s production is exemplary, and Lowell George’s vocals are expertly recorded elsewhere on this record. Of course, this album is all AAA, predating the digital regression by several years.

Again compared to the original Silver Hybrid S, the treble range of the 2-S is smoother and less obvious tonally, but with increased resolution. This is a seemingly contradictory combination that is certainly remarkable, and welcome. There is a small gain in upper treble extension, which benefits the Destiny more that it does the Optimum. This is all about character, not quality. Voices with the new OL cable gain a small degree of intelligibility over the original “S”. Cymbals lose of touch of sheen, but gain a bit in enhanced tone of metallic ringing:  a more focused sound. Small details about the recording and acoustics of the sound space are better understood over the 2-S cable. The new OL cable could be called “Silver Hybrid M” because everything is simply More: bolder, stronger, deeper, truer, and richer.

Of the two cartridges mentioned above, the Miyajima Destiny has a very small preference for the MonoS cable, and in a very democratic fashion, the ZYX Optimum cartridge prefers pairing with the Origin Live cable. That is not to say that the Destiny doesn’t also sound superb with the OL cable: it does! This is completely relative to the intrinsic sounds of each of the two cartridges, where the treble resolution and extension of the ZYX is already unchallenged. The ZYX Optimum is relatively more open and airier in the upper frequencies than the Destiny, while the Destiny’s lower frequencies are somewhat fuller and warmer. This is absolutely not to find fault with either cartridge, but to put my observations into some perspective and framework.

The B.M.C. MonoS phono cable and the Origin Live Silver Hybrid 2-S phono cable are two extraordinary products. I could live happily long-term with either cable on either of the two phono cartridges used for this review. Both cables are very high resolution and linear sounding, seemingly able to send every sound and nuance on every recording downstream towards the loudspeakers. Some folks have called our times the Golden Age of Analog. Either of these two outstanding cables can elevate that premise into a promise.

This review would not have been possible without the very kind support of Lisa at B.M.C. and Mark Baker at Origin Live. Thank you!

Thank you for that very nice review!

Let me add some additional information:
Monocrystalline silver is pretty rare, while the copper equivalent ist still popular. The idea behind it is simple: Every crystal connection within a metal has an electrical characteristic, which is never absolutely neutral. It is known that silver is the best conductor, and yet there is the experience about silver cables to sound always somewhat bright. Having dramatically reduced the number of crystals / meter by casting super long crystals is not only better in theory. The cable becomes perfectly balanced in sound and with a transparency which is unmatched.

The rest is in the construction. Low capacitance and low inductance is always the goal. Whenever we know the cable will be used with out phono amplifiers there is one more option for further improvement. Due to the low input impedance plus the balanced input the shielding is not that crucial anymore. Shielding is a capacitive load and therefore affects the sound quality. In this cases we do a “soft shielding” and connect the shield via a resistor which doesn’t have any functional disadvantages, but sounds even better.

I hope this information is interesting for your readers!