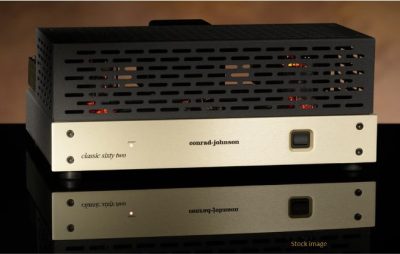 Dr. William Conrad and Dr. Lewis Johnson, both accountants and committed audiophiles, began selling their vacuum tube amplifiers and preamplifiers in 1977. Many of their current designs evolved from these early circuits. The Classic Sixty-Two SE can trace its lineage back to the Classic 60, various LP series models, and the older MV amps. Some of this rich history are treasured by collectors and serious cognoscenti. Many of these amplifiers share a similar layout: transformers in the rear, tubes in front, and connections on the rear panel. Although other brands share a similar physical layout, none display the gold anodized front panel that is a C-J trademark.

The Classic “62SE” stereo power amplifier is rated at 60 Watts per channel from 30 to 15,000 Hz at no more than 1.5% THD, a frequency response of 20 to 20 kHz +/- .3 dB, and hum and noise 96 dB below rated power. There are three 6922-type tubes and four KT120 power tubes. A C-J Classic 62, non-SE version, uses EL34 power tubes, but KT120 power tubes are not an option for this version. Biasing the power tubes is a simple procedure: turn the Bias Adjust trimpots slowly counter-clockwise until the tube’s associated LED goes out. The amplifier weighs a semi back-friendly 44 pounds and a carries semi wallet-friendly price of $5750. At least, wallet-friendly compared to some. C-J offers a premium amplifier, the stereo ART150, for $19,500. The “150” refers to both the power output and the power tubes: KT150, of which 4 are used. 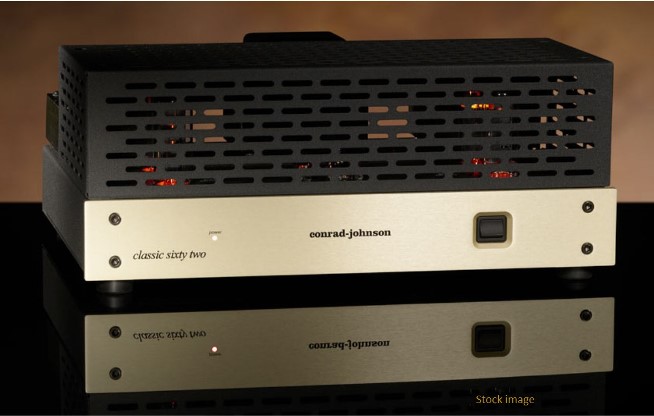 Inside the Classic 62SE, there are 4 fuses on the main circuit board and 2 fuses on the power supply board. The output transformers are tagged Foster A-16121-02, and are implemented with the secondaries wired in parallel. The wires from the RCA input jacks to the forward-placed input tube is loosely twisted and unshielded. These are just observations and are not offered as value judgements. C-J understands far better than I how to build a tube amplifier.

As we expect from C-J, the midrange sound is beautiful. This is a singer’s amplifier. Voices, both male and female, are very human sounding and rich in harmonics. This gives weight and depth to all vocals which are very 3-dimensional. The clarity throughout the midrange and lower treble is exemplary. Voices are easily understandable as they stand out in the mix. There is a hint of virtual reality here.

The Classic 62SE presents huge soundstages, and the size of the performance space is easily perceived. The sensation of the depth of the stage, and even the height of the venue, is outstanding and in this regard regularly provides the you-are-there feeling that makes attending a live concert one of the great pleasures in life.

The Classic 62SE does not warm up or prettify your music with a sweet, rolled off upper treble or caramel flavored midrange. The response seems very linear into the very highest treble. Poor quality recordings are not transformed into gems. There is a small amount of coarseness in the mid-upper treble even after 300 hours of break in. This might be the Teflon capacitors which typically can take hundreds of hours to fully settle in, or it could be a sign of the circuit topology. Recent experience with single-ended amplifiers including Cary, First Watt, Pass Labs, and Valvet, all have the special total purity in the upper frequencies that is one step closer to virtual reality believability. The Classic 62SE rarely achieves this level of performance.

Substituting the center 6922 input tube and the two 6922 driver tubes changed the sound to some degree, but did not eliminate this character. Gold Lion 6922 tubes were substituted for the stock EH variety with very little difference. This might be due to the fact that the Gold Lions, upon close examination, looked very similar to the Electro Harmonix tubes. NOS Tesla 7DJ8 were also an interesting swap, but again, the overall character was little changed.

The bass resolution is very good, but the bass power decreases as the frequency gets down into the lower bass. This is a trait commonly associated with tube amplifiers. The bass reaches the lowest notes, but power and dynamics become more limited as the frequency decreases. Even so, it is still possible to hear bass strings vibrating and the huge sound of a bass drum. Engaging the JL Audio subwoofers, using their high-level 4.3k Ohm connections, showed that this is the actual performance of the amplifier, not a factor of driving a low impedance, power hungry speaker load.

The EL34 is an excellent tube for an audio amplifier and a listen to a Classic 62 will happen at the next opportunity. It would be very interesting to still have the $3495 Rogue ST-100 available for direct comparison to this Classic 62SE. Both amplifiers use KT120 power tubes. Based on the musical satisfaction I documented from the Rogue amplifier, it seems it was preferred over the C-J by a significant margin. If we rank-order the amplifiers on hand from relatively the most enjoyable amplifier to the least, the entirely subjective order is:
Valvet E2 SE
Wyred 4 Sound ST-750LE
Primaluna Prologue Premium
C-J Classic 62SE
Primaluna Prologue 5
Ayre VX-5

The Classic 62SE was completely reliable during the review period, and the bias of one or two of the power tubes required just a small adjustment or two after the initial setting. The sonic character is very linear and transparent from the upper bass to upper treble, so this is not a tube amplifier to “sweeten up” an overly dry or harmonically thin system. The owner of a C-J Classic 62SE amplifier will get the characteristic harmonic depth of tube products in a good looking, musically revealing, reliable, and quite powerful amplifier.