This is not an easy review to write. For several months, the Quicksilver V4 amplifiers have been the primary amplifiers in my ever-changing audio system. I have connected them to four different preamplifiers and four different speakers, and numerous cables and power conditioners. I have replaced the Graham 2.2 tonearm with a Phantom on my Kuzma Stabi Reference turntable. I have listened to several excellent cartridges, including a Shelter 90x, Zyx Airy 3x-SB, and Ortofon Jubilee. Some of the interconnects included Nirvana S-X Ltd., Nordost Valkyrja and Valhalla, and Oritek X-1 and X-2. 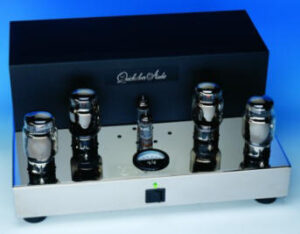 Throughout all of this change, the $3995 V4s have quietly sat on my shelf, requiring no maintenance besides a bi-weekly bias check. This adjustment is quickly and easily performed with the built-in calibrated bias meter and potentiometers; the latter are easily accessible. The amplifiers don’t hum or in any other way draw attention to themselves. On the other hand, the polished nickel chassis with the black transformer cover and a blue power-on LED is very attractive.

Quicksilver Audio has been in business for over 20 years, and many of their amplifiers have been recognized for exceptional performance. The V4 mono amplifiers are the top-of-the-line product and have been in production for a couple of years. They are completely point-to-point wired (no circuit boards). When I was talking with owner Mike Sanders about the V4, I asked if there were any upgrades available such as better capacitors or wire. His response: “none”. He apparently feels that the standard, “off-the-rack” model is just fine.

The 120 watt per mono chassis Quicksilvers use just two input tubes and four KT-88s each. The power tubes are the current Chinese Shuguang remake of the highly regarded British Genelex tube and are readily available. This tube compliment makes the V4 one of the least expensive amplifiers in its power class to re-tube. I tried JJ/Tesla EL34 (too warm and rolled off in the highs, with loose, wooly bass), and also Svetlana 6550C (relatively thin in the midrange), but quickly returned to the stock KT-88s. Matched tube sets are not required because there are bias adjustments for each power tube. Mr. Sanders suggested that about 40 hours would satisfy most requirements for break-in, but I felt that the sound stopped changing at closer to 100 hours. So now, after several hundred hours listening to these amplifiers, how do they sound?

These amplifiers are the most neutral, revealing, and highest performing amplifiers in my experience. They do not sound like amplifiers, in the traditional sense. They have NO identifiable faults when used with appropriate loudspeakers. I did notice a very, very small trace of a wispy artifact in the upper treble when used with the very sensitive Fostex S-168 speakers. Very small. It must be noted that these speakers have performed best with either single ended 300B or 805 amplifiers in the 10-20 watt range. The speaker’s high frequency resolution is excellent, although it has been shown to be too relentless with many amplifiers. This is why the softer 300B or relatively more extended 805 amplifiers have been a good match. With my home theater Dynaudio Audience 60s, a pair of B&W N804s, or my more usual Magnepans, this anomaly was never observed.

The V4s have exceptional resolution and are the most neutral tool for reviewing that I have ever used. The differences between interconnects, speaker cables, power cables, tonearms and cartridges, etc., are very quickly and easily identified. My previous reference speaker cable, Acoustic Zen Satori, was exposed as being slightly hard and grainy in the upper midrange and lacking in upper frequency dynamic abilities. The not-yet-released PS Audio xStream Reference speaker cables were preferred by a large margin. Similarly, the advantages and disadvantages of other cables and preamplifiers were never hidden or difficult to identify, but took a short time – often much shorter – to reliably discern than with other power amplifiers.

Nurse, hand me a scalpel and let’s get to work.

The bass is deep, powerful, tight but resonant, and perfectly balanced with the upper bass and midrange. Solid state bass? Tube bass? Neither, and both. It does not suffer from solid state leanness, nor from typical tube lack of control. There are certainly speakers which might need more control or otherwise might benefit from a more tubey sound, but I found the Quicksilvers to have the ideal character and balance of strengths in the bass. I could easily tell that the Ortofon Jubilee cartridge has the most powerful and controlled bass of any cartridge on hand, and the amplifier clearly showed the very slightly lean, but very deep and powerful character of the Nirvana interconnect cables.

The upper-bass and lower-midrange, artificial constructs we use for discussion, have similar power, definition and control as the low bass. This is one of the areas that make this amplifier special because male voices, in particular, have resolution and control that are rare. Voices are much easier to follow than with lesser amplifiers. I call this the “Live Mic Effect”. A vocalist will often move the microphone away from his or her mouth when singing loudly. The purpose is to not overload the mic, but the effect is that the music intrudes on the mic feed and the vocals lose their primacy on the channel. It becomes difficult to follow the words. The high resolution of the V4 enables the listener to follow each word and vocal inflection easily, if the source is able to provide this information. This is a major benefit and strength. It is the rare amplifier that can maintain its composure during complex music and keep everything sorted out, neat and tidy.

Listen to “Foggy Mountain Breakdown”, on Sheffield Lab’s After Midnight (TLP-30). This may not be your favorite type of music and frankly, it isn’t mine either. Through the Quicksilver amplifiers, you will be very impressed and revel in the enjoyment of Sam Bush’s lightening-fast finger work on the banjo and Gary Walters’ great bass playing. Yes, it may be a case where you enjoy the sound more than the music, but it sounds awesome! If you are not smiling when this short cut is finished, your system needs an upgrade.

The midrange and lower treble complement the excellent standard set by the Quicksilvers in the lower frequencies. Nothing stands out, but in the same way, nothing is missing. The upper treble is clear, highly detailed, and extended when the source requires it (and can deliver it). The amplifier is not bright or at all forward, but neither does it sound recessed, dark, rolled off, or otherwise not in character with what the music demands. It is easy to hear the rough electronic artifacts imparted by early solid state recording electronics. But it is also apparent that some audiophile re-mastered disks, in an attempt to hide the faults of the original recordings, lack high frequency sparkle and air. This is a confirmation of the amplifier’s neutrality that different recordings have an intrinsically different sound.

The V4 strikes the fine and perfect balance between fast attack and rich harmonic resolution. If you have been in this hobby for a while, or listened to a number of components, you know that this balance is a fine line, indeed. Solid state is almost always very good at presenting the fast, leading edge but is harmonically lean with less-than complete development of natural, upper order harmonic content and decay. Tube gear is almost always excellent at presenting rich harmonics, but can sound slow and lacking in leading-edge attack. The V4 combines the dynamic ability and speed of the best solid-state in its power class with the complete harmonic development of the best tube gear. Very satisfying.

Sound staging is exceptional. Left-to-right and front-to-back are clearly presented. In Saint-Saëns “Danse Macabre” on the RCA Living Stereo LP Witches’ Brew (RCA Victor LSC-2225), the horn section, about mid-stage right, is as real and distinct as ever. Each instrument is defined with great precision, even during the build to climax that has everyone playing at wall-shaking volumes. And the explosive climax is, well, explosive, but without becoming an indistinct wall of sound. Likewise the percussion is spread out naturally in the rear of the stage. The triangle on the left side rings clear and true. The illusion of height is also presented with convincing reality. You get a very good sense of the position of the recording microphones in many recordings, whether further back or closer, and higher or lower. This adds greatly to the feeling that you are there in the actual recording venue.

The best results were obtained with the amplifers plugged directly into the wall outlets for power and not through a Shunyata Hydra 2 or Hydra 4, or a PS Audio Ultimate Outlet. The open and dynamic Oritek X-2 interconnects were, as usual, outstanding partners. Warm-up time was short: about 10-15 minutes. With new power tubes, expect some change in the bias setting over the first 50 or so hours of use. After that period, I found the bias to change less than 1 ma per month from the recommended 40 ma. This is a stable amplifier!

The Quicksilver V4 is a great music making product. It is completely reliable, a fact that will hopefully make the V4s attractive to those of you who are reluctant to allow tubes into your homes because of the concern for maintenance. It is relatively small and light weight, and looks great but without needless and expensive frills. It sounds superb with all types of music and with any associated gear I connected to it. It is extremely neutral in character. It is powerful and dynamic as required but also has great finesse and impeccable resolution. You can spend a lot more for similar power, but in my experience, you probably will not get anything better in a tube amplifier than the wonderfully musical Quicksilver V4.