Reviews of phonograph cartridges can be pretty darn worthless. Irrelevant. Reviews can put a cartridge into some kind of comparative framework where you understand that Cartridge A does this or that, more or less, better or worse, than Cartridge B. The issue of how a cartridge actually sounds, though, is highly dependent on the environment in which it is evaluated. This applies to any category of component, of course, but cartridges most of all.

Phono cartridges are the smallest, lightest, most fragile, and deal with the tiniest electrical signal of any component. Plus, their sound is reliant – to a very significant degree – upon the tonearm and turntable with which they are used. So it is here at the outset that I tell you to keep in mind that the results of my auditioning were obtained when the UNIverse was used exclusively with the Origin Live Conqueror tonearm. The timing of the comings and goings of the pieces and parts of my review system had the UNIverse shipped out just a few days before a new Tri-Planar VII tonearm shipped in. I will speculate below on the how the UNIverse may have sounded on the Tri-Planar tonearm.

The Zyx UNIverse, list $7,950, Sorasound distributor price $5,350, is absolutely and unequivocally the best phono cartridge I have ever heard in the most important musical region, and competitive in all others. It does not exhibit the huge dynamic power of the vdH or Benz, nor the totally integrated and even-handed upper midrange and treble presentation of the Jade Platinum. But, oh baby, the midrange of the UNIverse is wondrous! This cartridge is revelatory for human voice and most acoustic instruments. The level of natural detail and depth of tone is constantly and continually amazing, lifelike, and very satisfying. If you listen primarily to acoustic and vocal music, you must hear what the UNIverse can offer you in terms of tactile, fully developed, and human sounding voices. This is a result of a new State-Of-The-Art in midrange resolution which is unequaled by any other cartridge listed here or auditioned previously.

Simply declaring that the UNIverse has the best midrange in the business does not tell you what you will hear, though. The midrange is where the fundamental sounds of almost every instrument and voice originate. Brass instruments each have their own distinctive sound and the UNIverse makes it a simple matter to hear, for example, the differences between a trumpet and a cornet. I found new enjoyment from the brass section of any orchestra that visited my listening room, in fact, because each instrument had more of a unique personality which stood out in greater relief compared to the next section. All vocals had newfound depth and meaning, from Mark Knopfler’s often gritty singing, to the rap-inspired smoky diaries of Alicia Keys (I dig “Samsonite Man”), to The Nylons’ dancing harmonies. Complex vocals, indeed, complex music of any genre, are one of this cartridge’s strengths.

It is worth noting that the UNIverse was the main cartridge used during my review of the Bella EXtreme 100 amplifiers. The extremely positive comments in that review about “energizing the air” were largely, although not entirely the result of having this cartridge at the head of the playback chain. This sensation was still present with the Condor, but to a much lesser degree than with the UNIverse. The ultra-high resolution of the UNIverse provides a very deep and wide sonic image, with layers and layers of depth, each blending smoothly into the next. If the recording was made in a large hall, or outdoors, or in a small club, you will know it. However, studio recordings are rarely so analytically presented that they lose their musical meaning. You will certainly hear the multi-track mixes, but not at the expense of musical enjoyment. There is often a very fine line in playback systems between reproducing all of the information from the source recording and presenting it in a musically consonant way and without forwardness, brightness or glare. The UNIverse walks this fine line expertly, pushing the envelope to the outer limits, but never going over the edge into hyper-detailed unpleasantness. 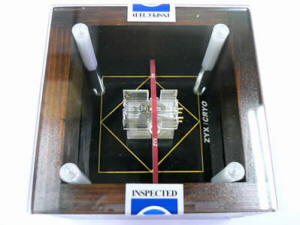 The preceding paragraphs should either confirm much of what you are hearing in your UNIverse or give you a good reason to consider an audition. The version under review here is the copper wired UNIverse with 0.24mV output. The VTA seemed optimal with the cartridge slightly down in the rear. I usually set VTF with a digital gauge and then dial it in by eye and ear, trying to use the least amount of downward force that does not result in mistracking. I started at 1.9 grams and lightened it up just a bit after 150 hours of break-in. I find this final setting is different for different tonearms and can change slightly depending on the room temperature. If it changes slightly but still sounds good, it does not cause me any distraction to enjoying my music. The UNIverse’s 4 Ohm coil DCR suggests a loading of 100 Ohms resistive, and this is the value I found to be optimal. I think the box is nice looking but requires extra effort to use because of the way the cartridge is sandwiched between its mounting plate and the clear top cover. Remove the cover’s four screws and all is well, though. The one other negative comment I have about the product is the high retipping cost, which, at 60% of list price, is greater than the fee to retip the similarly priced Jade Platinum. If you are budget-conscious like I am, please do not do the math to see the per-hour cost of listening to each of your records. You went ahead and ignored my advice, didn’t you? Well, friends, such is the price of excellence!

Besides that perfect midrange, the quality of all other frequencies is excellent, too. I noticed a small reticence in the upper bass which slightly reduces the perception of bass detail. And the upper frequencies have just a bit less of that amazing resolution that the midrange offers so effortlessly and completely. This character was also noted in my review of the Zyx Airy 3x, but it is present in the UNIverse to a far, far smaller degree. It is impossible to say with any certainty how any cartridge might sound on a different tonearm, but my ongoing – and now permanent (insert wink here) – use of the Tri-Planar VII suggests that the small deficiencies I observed in the UNIverse would be, at least, ameliorated with this tonearm. While the Tri-Planar does not seem to be better than the Conqueror in large scale or macro dynamics, it is superior in almost all other areas. A full review of the Tri-Planar VII is in progress.

So here I am, staring at my monitor, which is displaying Windows Vista Business and Office 2007, and the word counter in Word is indicating about 1,300 words. This is quite a few less than the average length of my reviews, but I can’t think of anything else to add. After saying “state-of-the-art” and “excellent”, and suggesting that the Conqueror tonearm may not be the optimal host, I think you get the idea. I hope that the “take-away” from this review is the following: If you want to hear one of the very best cartridges available today, you must audition the Zyx UNIverse.